But what about when this old-world beauty gets a little less "River Walk" and a little more spectral? In honor of the season of spookiness, here are 13 of our favorite classic San Antonio urban legends, scary stories, and tall tales.

A vintage postcard showcasing the Hot Wells resort in its original form.

In case you thought Hot Wells was just the arbitrary name of a South San Antonio neighborhood...think again. This area was originally built around The Hot Wells Hotel and Spa, a popular upscale tourist destination in the 1900’s (frequented by famous patrons like Teddy Roosevelt and Charlie Chaplin). However, the hotel seemed fated for obscurity: it burned to the ground twice in its lifetime, leaving only a pile of fascinating ruins. One of the creepier facts about Hot Wells: The resort apparently shared its artesian pipeline with the Southwestern Lunatic Asylum. (To read about more SA neighborhood histories, click here.)

A city as widespread as San Antonio is bound to have at least a few spooky mansions...and perhaps the most famous opulent haunts are located in The King Willia m Historic District, a gorgeous neighborhood reminiscent of New Orleans’ French Quarter. The most famous “haunted mansion” in the district is a former Bed & Breakfast called the “ Gasthaus.” From flickering lights to swinging doors to mysteriously shaking objects, the home’s invisible occupants remain a mystery. 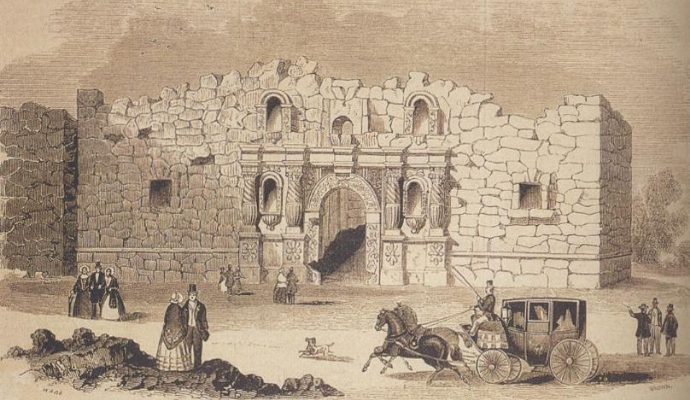 The Alamo may be less-than-spooky in broad daylight (surrounded by a million tourists, as always), but consider the famous landmark’s cutthroat legacy. Besides standing as a symbol of Texas bravery, The Alamo was also the final resting place of many a brave soldier. One famous story claims that, in 1836, Mexican forces attempted to destroy the Alamo, only to be foiled by ghouls armed with fiery weapons. These days, visitors have reported various spooky happenings, including ghostly figures, sounds, and unexplainable shifts in temperature.

With a name like “Huebner -Onion Homestead”, the only thing you’d expect to plague this historic spot is halitosis. However, local lore has other ideas: apparently, the restless ghost of Joseph Huebner walks the premises. The old story claims that Huebner’s untimely death was caused by a simple mix-up: he mistook kerosene for whiskey. While the ghost doesn’t plague daytime visitors, this old homestead and stagecoach stop is worth a visit. 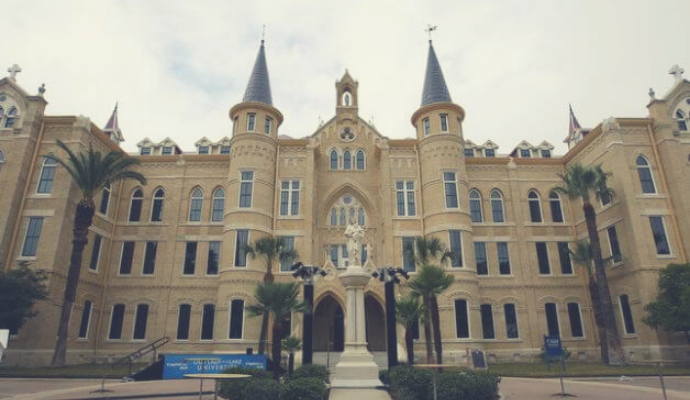 Image Courtesy of  Our Lady of the Lake University

5. Our Lady of the Lake University

Located in the Westlawn neighborhood, Our Lady of the Lake University bears a strong resemblance to a stately castle. Naturally, the ghost stories emanate! Apparently, Pacelli Hall (a dormitory building) is haunted by the spirit of a sneaky boy named Jack, a sprite who enjoys theft and mischief. Various parts of the University are also said to be haunted by spectral nuns. 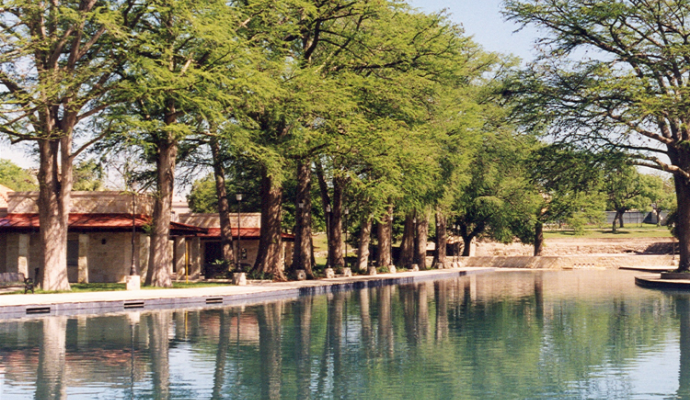 Image Courtesy of the City of San Antonio

As the second oldest park in the state, San Pedro Springs has seen its fair share of generations come and pass...but some say that several of those generations still hang around, unseen to visitors. Some say they’ve heard strange sounds in the park when no one is around, from children’s voices to Native American drum ceremonies.

A classic historical site in downtown San Antonio, the 1850’s Navarro House celebrates the life (and afterlife) of José Antonio Navarro, a Texas patriot and leading advocate for Tejano rights. Reports have outlined numerous shifts in temperature, mov­ing furniture, flickering lights, and more...all supposedly conferred by ghosts. Besides the benevolent and friendly spirit of Navarro himself, these figures have also included a Confederate deserter and a bartender slain on the job. Eek! 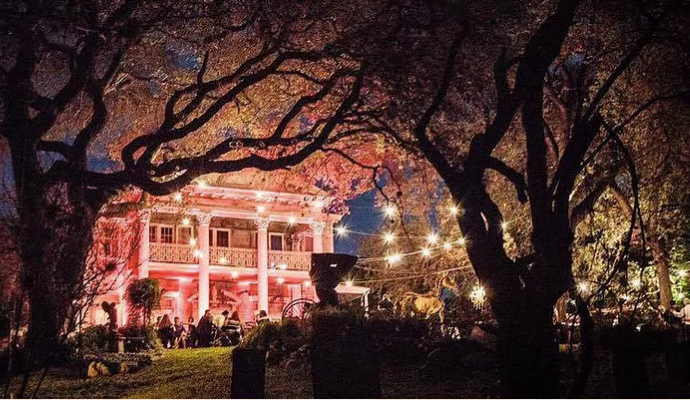 Named for William Shakespeare’s favorite pub, Victoria's Black Swan Inn has a spooky past that bends toward the theatrics. Besides being the site of the 1842 Battle of Salado Creek between the Mexican army and Texans, the Inn was also home to Fort Sam Houston's former hanging tree. Visitors have reported sightings of spirits in the woods, as well as ghostly figures in the home itself. Now a venue for weddings, receptions, and catered dinners, Victoria’s Black Swan Inn describes itself as “hauntingly romantic.”

Located in the southern section of the city on South Zarzamora, the famous “Chinese Graveyard” remains a well-known spooky destination. Also known as Loma China Cemetery and the Guzman Burial Ground, this private family cemetery supposedly came about as the result of one prestigious man’s forbidden love story with a Chinese woman. The Romeo-and-Juliet- tale involves a lightning strike, a secretive family, a curse, and a heartbroken suicide. These days, it’s said that the ghost of the woman can be seen in various forms at night. 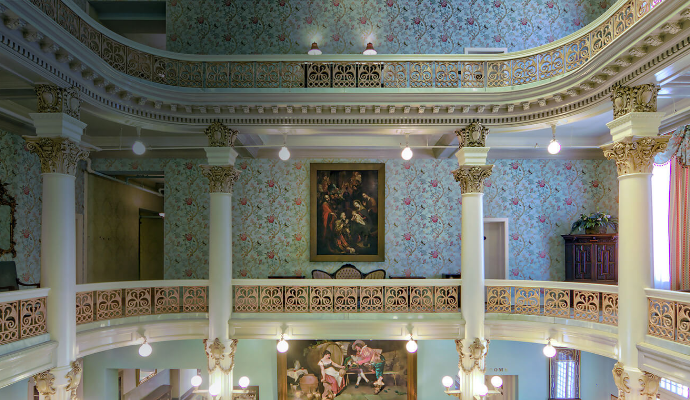 Image Courtesy of the Menger Hotel

A continental breakfast, a mint on the pillow, and...an 1870’s chambermaid? It turns out  The Menger Hotel’s standard fare is a bit unearthly. As the oldest continuously operating hotel west of the Mississippi, the Menger is bound to have a few invisible quirks. Employees and guests of the hotel have reported numerous paranormal sightings, including “Sallie White” (the long-dead chambermaid), Captain Richard King (dressed in a bolo tie and black hat), and a mysterious woman nicknamed "The Lady in Blue."

12. The Grave of Pat the Horse

One of the more whimsy tales on the list belongs to “Pat,” a young brown thoroughbred who arrived at Fort Sam Houston in 1912 as a part of the cavalry. Pat soon became a favorite steed of the military men, a status that led soldiers to “smuggle” him out of the military to avoid an untimely death. He was stripped of his military rank and lived at Fort Sam Houston as a “civilian” until 1953 when his passing was mourned by an elaborate funeral. Today, you can see Pat’s elaborate gravesite near the post entrance at Cunningham Street. It’s said that, if you’re very quiet at twilight, you can hear the clopping of hooves and a whinnying sound in the distance.

Serving up more than one type of “spirit”, the Grey Moss Inn is a dinner venue with a colorful past. Apparently Mary Howell, the original owner of the restaurant, still haunts the establishment via the rather pleasant smell of her rose-scented perfume and occasional visual appearance.

Are you still exploring San Antonio? We’d love to show you around! Whether you’re new to the area or just looking to relocate, let us give you the insider details. Download our exclusive Buyer’s Guide here, and contact an agent today to get started!