As San Antonio prepares to celebrate its upcoming Tricentennial Commemorative Week (May 1st-6th), it seems that the eyes and imagination of the Alamo City have taken a trip back in time.

All year, San Antonians of all ages have had the chance to reflect and remember the sweat, tears, laughter, and traditions of generations past through art, history, music, and various performances,

And so, in the spirit of old-school nostalgia (and thanks to the extensive photo galleries made available by UTSA Special Collections), we compiled a collection of 27 drawings, etchings, and photographs that capture little, distilled moments of everyday San Antonio life...in a wistful, flipping-through-old-photographs-at-an-antique-mall kind of way.

1. Oh my, how times have changed! This 1837 map of Texas shows the contiguous American and Mexican states, drawn by J. H. Young.

2. Entitled “Camp of the Emigrants”, this engraving depicts early remnants of San Antonio life: a company of travelers setting up camp along a stream. 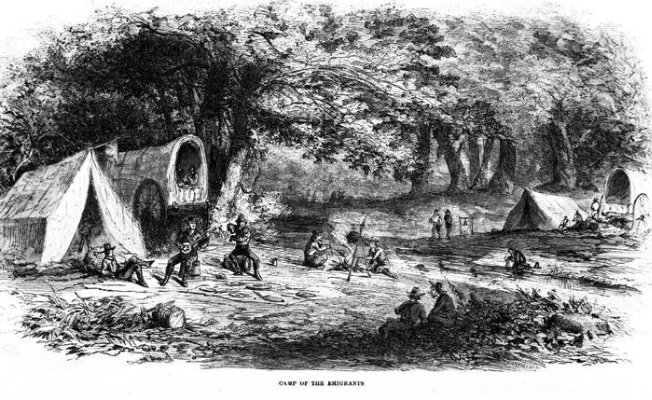 3. Now a bustling downtown scene, this engraving shows the humble beginnings of central San Antonio: a once-rural block between Commerce and Houston Streets! 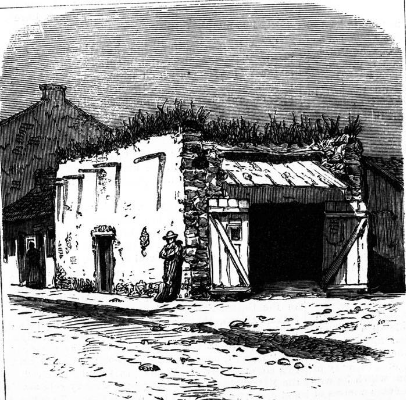 4. Do you know your Texas history? This photograph shows Texan troops in front of the Plaza Hotel, Main Plaza, preparing to depart on a mission to seize Federal posts on the frontier. (1861) 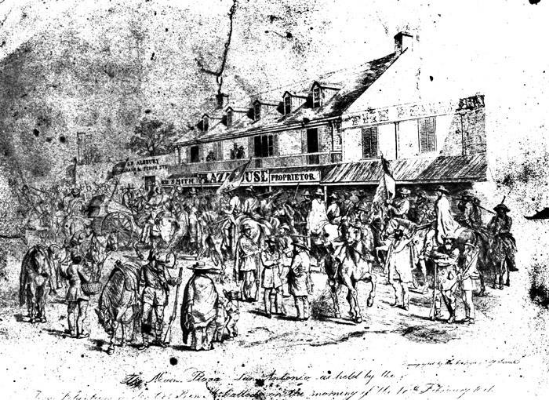 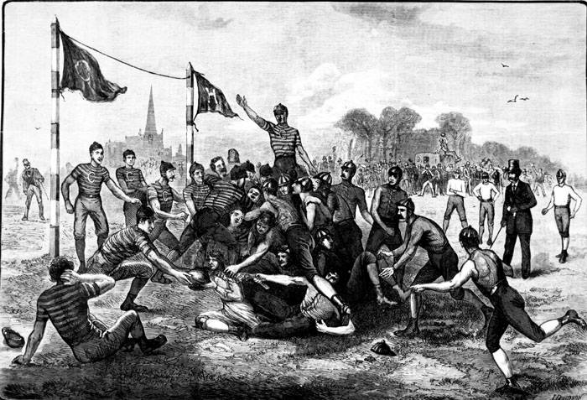 6. An early bird’s-eye view from the roof of the Menger Hotel! This photo depicts a meat market and several other buildings on west side of Alamo Plaza (1866) 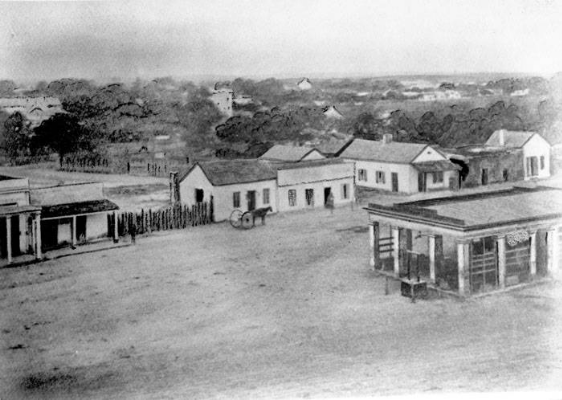 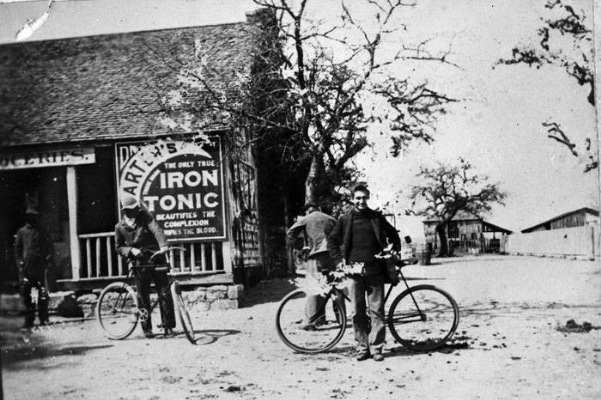 8. You may not see too many old-school cowboys in San Antonio these days, but our fair city was once a haven for those legendary Texas explorers. (1880) 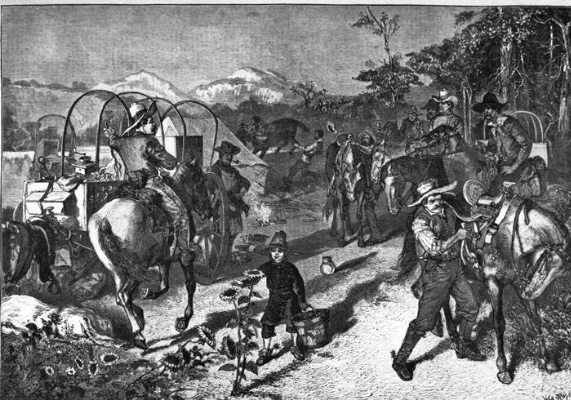 9. A far cry from our modern-day pit stops, this drawing by Frederic Remington depicts buffalo soldiers (in the 10th Cavalry) adjusting packs on mules. (1889) 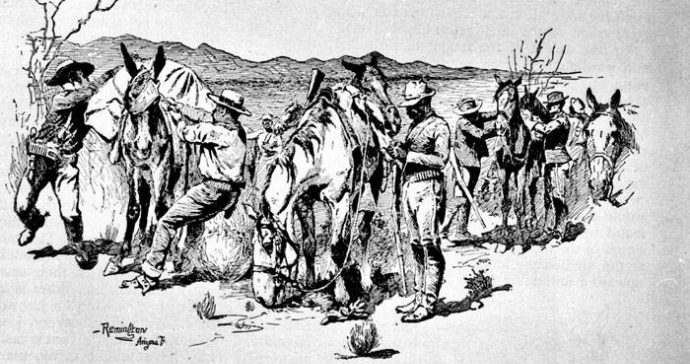 10. Ah, that Spanish Moss! Can’t you imagine riding in a horse-and-buggy through Brackenridge Park? (Early 1900's) 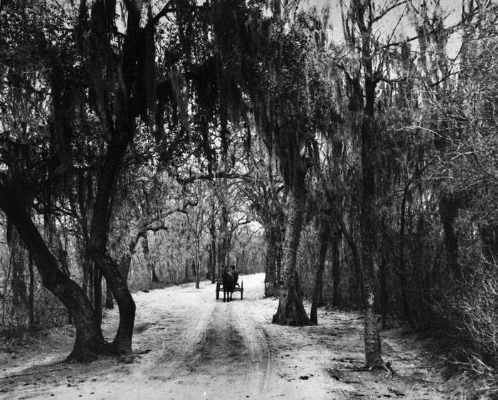 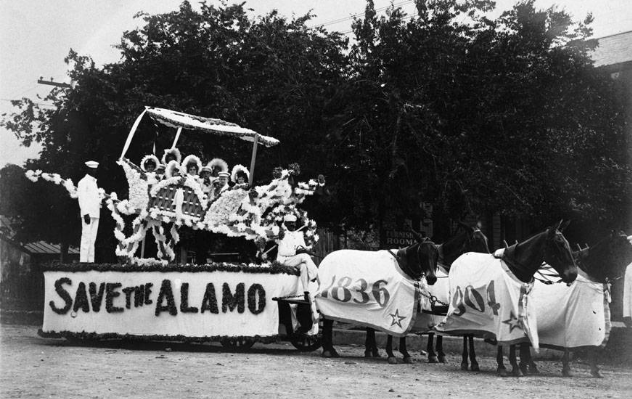 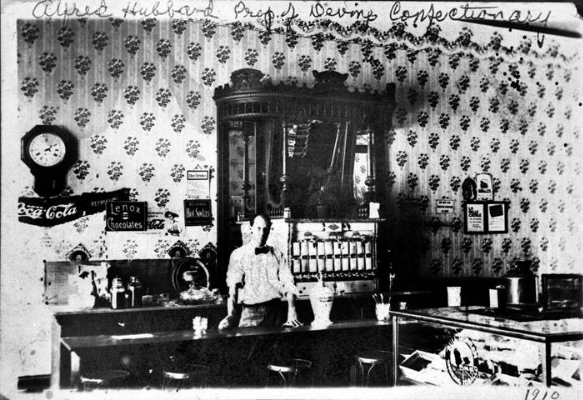 A rather romantic silhouette of Texas life (est. 1912) 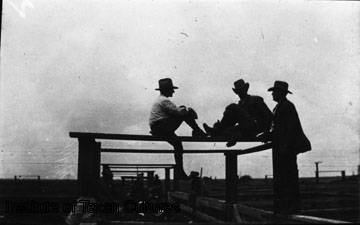 14. A July 4th brass band rides to the festivities in style on a wagon decorated with star-patterned fabric. (1914) 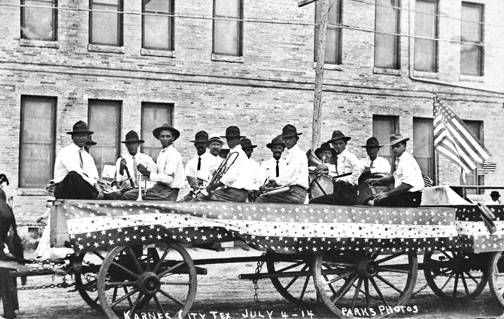 15. Army pilots casually relaying their adventure to young boys after a crash landing. (1917) 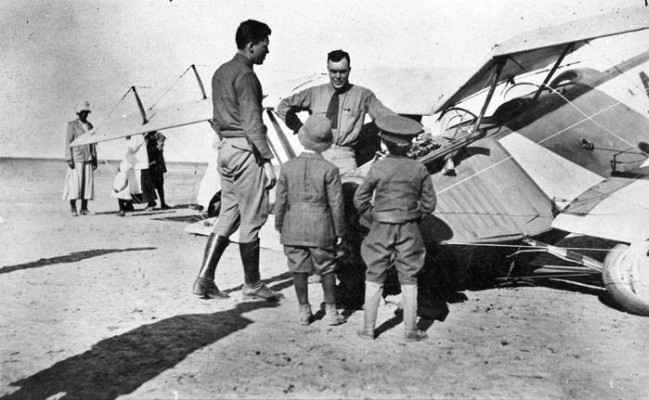 16. And the city grows. Take a look at this aerial shot of Commerce Street between the San Antonio River and Main Plaza! (1923) 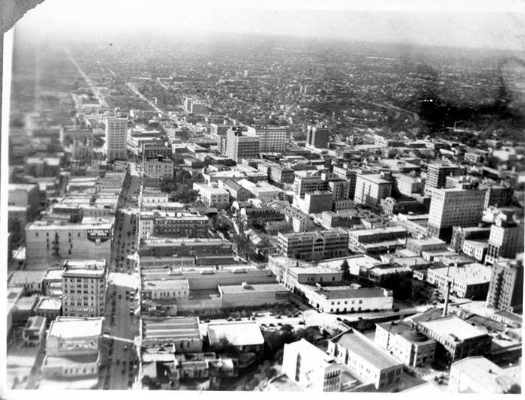 17. This sassy shot shows two Bastrop High School girls showing the backs of their stockings. Get it, girls. (1925) 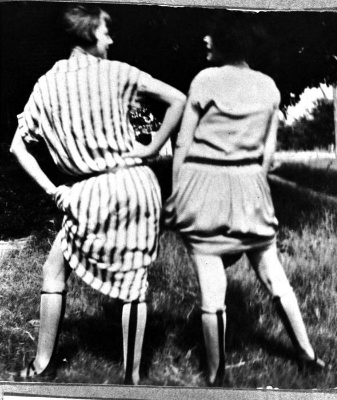 18. Early days at the zoo: this photo shows an African elephant at the San Antonio Zoo in Brackenridge Park. (1927) 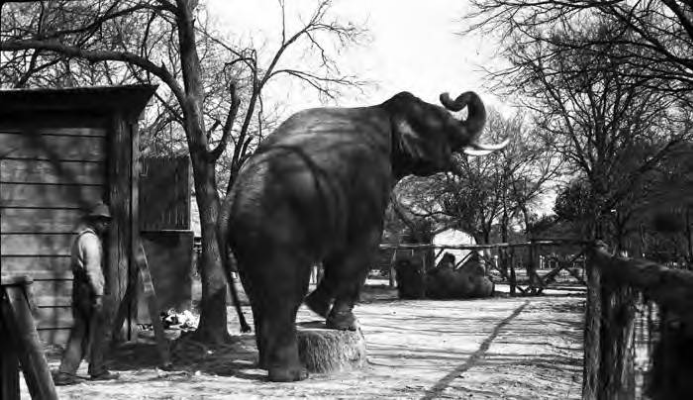 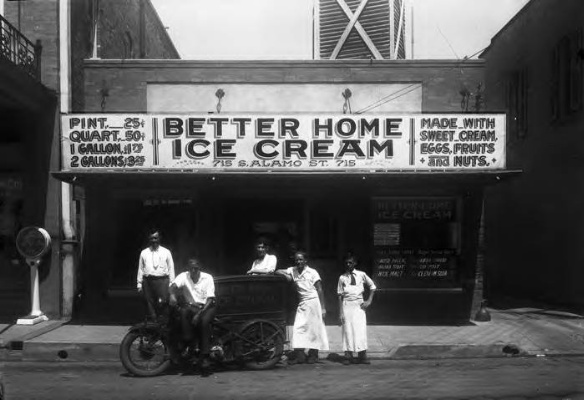 20.  A crowd eating barbecue at tables outside Mission San Juan Capistrano during a regular parish "," which also included bingo and other features of a church carnival. () 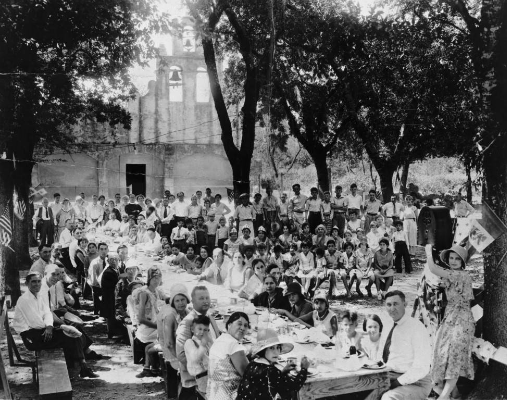 21. This one holds a special place in our hearts, depicting the swearing-in of the first Mexican-American U.S. Navy nurse “Miss Placencia” (1941) 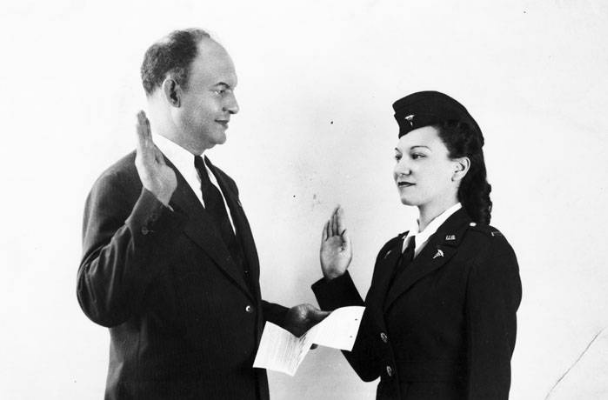 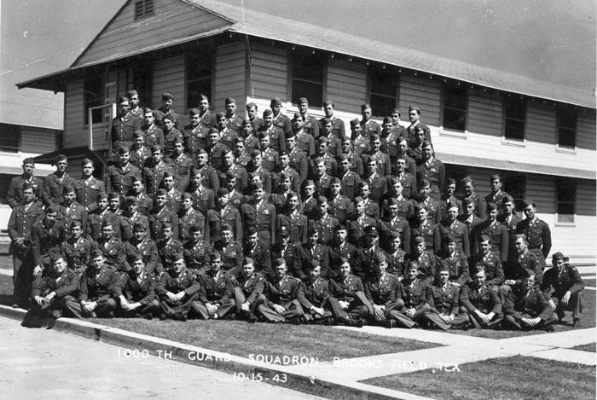 23. The San Antonio River is more than a tourist spot. This photo shows a baptism Sunday for Mount Galilee Baptist Church. (1952) 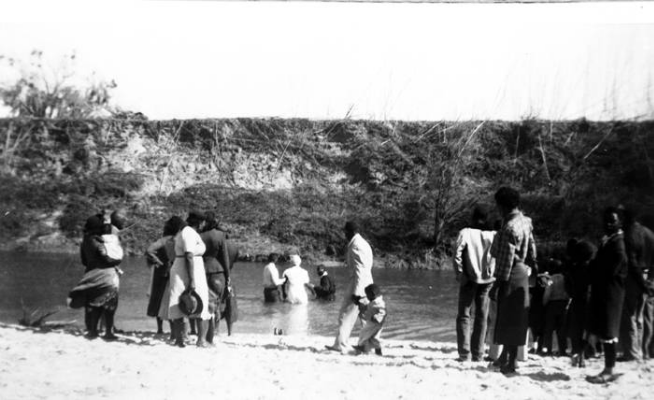 24. Young love! Barbara Acord and boyfriend, Neal Evins stand on the lawn of the Snyder residence in the Highland Hills neighborhood. (1956) 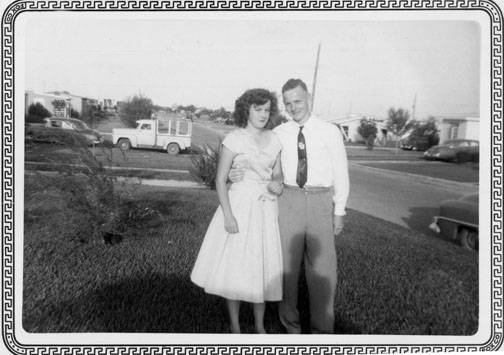 25. Lest we forget our Texas pride, this shot shows a mounted Texas Ranger holding the Texas Ranger Flag. (1957) 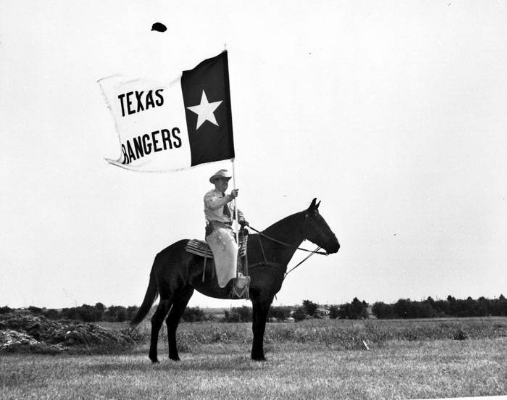 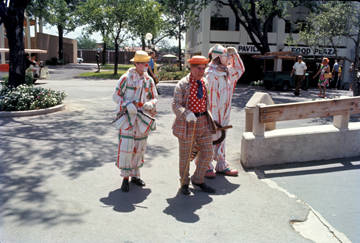 27. Is this photo nostalgic or what? Children swinging at a pinata in Brackenridge Park. (1975) 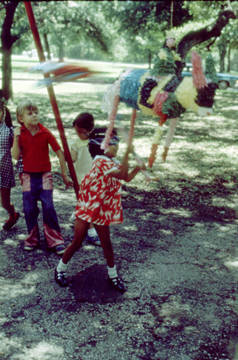 From music-and-dance performances to gallery openings to festival happenings, San Antonio’s Tricentennial Commemorative Week will be packed to the brim with celebratory full-city events. Click here to see the full event schedule or to volunteer for community service projects.

If you’re interested in adding your legacy to San Antonio’s, we’d be more than happy to connect you with a lender, provide you with exclusive San Antonio resources, and show you more about our wonderful city!


15 of San Antonio’s Most Beautiful Restaurants