The first three quarters of the year have already proven very successful in the San Antonio area housing market! The total home sales for 2015 are over 10% greater than they were at this time last year. Prices are rising as well...the average price of a home has also increased to nearly $233k (about 7% greater than last year). The median price also rose by to 8% to just over $194k. Days on the market have remained low at 59 days, while the price per square foot edged up by 6% to $105.

As the local job market and economy have steadily grown stronger, more renters have been able to make the jump to homeownership. San Antonio has also been attracting many new residents, from young professionals to families to retirees. This has sparked an extra measure of competition when it comes to buying and selling real estate...a very positive thing for our city! As the available inventory of houses becomes tighter, homes sell faster and for more competitive prices (commonly dubbed a “seller’s market”). Navigating a seller’s market can be tricky, which is why choosing a knowledgeable REALTOR® is crucial.

The month of September finished up the prosperous summer buying and selling season with a total of 2,412 homes sold, a solid 7% increase from 2014! The average sale price increased 6% from last year to $233,218, and the median price rose 4% to $191,700. Despite these increases in average and median prices, over 97% of homes on the market sold for list price...an incredible sign for this market! San Antonio homes are in demand, and it’s not hard to see why. Average time on the market was 52 days, and months of inventory has remained steady at 4.0, meaning it would take only 4 months to sell all the homes currently on the local market.

Clearly, though the busy season is coming to a close, buyers are still actively searching for a home. September ended with 1,979 sales still pending. Angela Shields, SABOR’s President and CEO, explained that: “Our summer buying season was one of the most active we’ve seen and now it’s starting to wind down. Nevertheless, there is still plenty for buyers to choose from and the good news for sellers is buyers during this time of year are typically more serious about making a purchase.”

So what types of homes are selling most in San Antonio? SABOR usually generates statistics based on three categories of home pricing: 0-$200k, $200k-$500k, and $500k and up. The greatest amount of homes sold (just above half) were in the first category (0-$200k). Next came the middle category, making up approximately 42% of area sales, followed by the $500k and up category, which filled in the remaining 5%. This month, 13 homes were sold for a price above $1 Million! The luxury home market has been steadily growing stronger in the Alamo City.

SABOR also reported on statistics within Bexar County, Kendall County, and Wilson County. In Bexar, there was a 6.7% increase in homes sold, and the median price increased by over 5%. Kendall County showed a whopping 44% increase in sales, while Wilson County sales went up almost 5% from September 2014. Other surrounding areas have been thriving as well! Mary Ann Jeffers (SABOR’s 2015 Chairman of the Board) pointed out that sales in Boerne, Helotes, Leon Valley and Terrell Hills increased at least 50 percent from last year!

From these numbers, it’s easy to see that Texas as a whole is gaining speed in the real estate world. In the state, 25,975 homes were sold in Sept, an 8.6% increase from 2014! Just like San Antonio and its surrounding areas, the median price and average price increased 6% and 3.4% respectively.

Sustained job growth, low interest rates, and a consistently improving San Antonio economy have contributed to these improving statistics. More families are able to move from renters to homeowners, adding to the success of the real estate market overall. In fact, WalletHub recently reported that San Antonio has the healthiest housing market Texas, and ranks 3rd overall in the US! Now is an exciting time for the San Antonio real estate market...be sure to check in next month to keep up with local real estate trends and statistics! 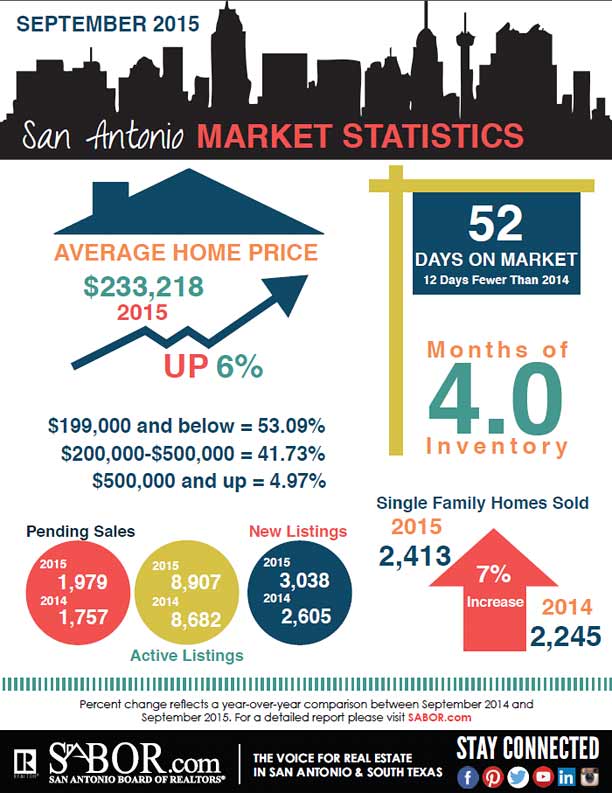 
6 Tips for Selling Your Home in the Summer