Last week the San Antonio Board Of Realtor®s (SABOR) released a report that detailed the San Antonio housing market in January 2015. The report included statistics, quoted experts, and more. Since you may not have time to decipher it yourself, we thought we’d give you the easy read version. You can also see an easy-to-read infographic at the bottom, courtesy of SABOR!

If you’ve kept up with previous reports, you know that the San Antonio real estate market is showing amazing growth. From 2013-2015, we have consistently seen more homes sold for better prices. This is good news for both buyers and sellers! This latest report proves that the upward trend is continuing. The statistics prove that San Antonio’s housing market is still growing stronger in all areas!

In January 2015 alone, home sales increased 5% from last year! 1,428 single-family homes were sold across the city. The average prices rose from about $194k to over $212k…almost a 10% increase since last year! Compared to 2013, this is even more impressive. The average price has risen almost $28,000 in just 2 years. Median prices also went up 9%, rising from just under $162k to almost $177k. The rise in both the number of homes sold and sale prices indicates a very positive trend in the market.

In addition to good prices and increased sales, SABOR reports that the types of home sales are improving. Homes priced under $200k saw a 7% decrease in sales, while the mid-range homes ($200k-$500k) saw sales increase by 6%. Luxury homes over $1 Million also saw a 0.5% increase. Overall, the San Antonio market is seeing a shift towards better-quality homes. This trend points to an improving job market and overall city-wide economy. Angela Shields, SABOR’s 2015 President and CEO, explained that , “We have watched our mid-range and high-range markets increase over the last year, and 2015 looks to be no different so far. With our low cost of living, growing job market and continually low interest rates, homeowners are able to make their money go further.” It’s a good time to buy a home in San Antonio!

To finish off the details, SABOR also reported that homes only generally stuck around on the market for 74 days, 3 fewer than in January 2014. The current months of inventory are at an excellent 3.6, considerably better than the national average.

And San Antonio isn’t the only market thriving in Texas! SABOR quoted the 2014-Q4 Texas Quarterly Housing Report recently released by the Texas Association of REALTORS®, saying that 66,664 single-family homes were sold statewide in the fourth quarter of 2014! This means an 8.46 percent increase since the same time 2013. Essentially, the trends in the last several months indicate that the market will continue growing stronger.

Mary Ann Jeffers, SABOR’s 2015 Chairman of the Board, confirmed this by saying, “We saw year over year growth in our prices and sales figures throughout 2014, and with January getting off to a similar start, we expect 2015 to continue that trend.” 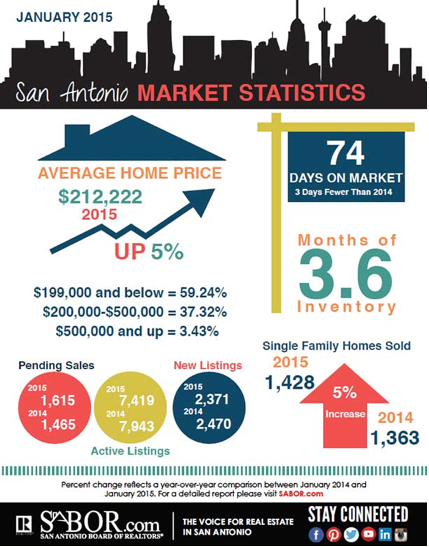