In December, over 2,000 homes were sold in San Antonio…a huge 16% increase in sales from last year! Homes in the $200,000-$250,000 range have proven the most successful, accounting for about 13.5% of all home sales. Homes generally only stuck around on the market for about 70 days, while the average price rose 5% to approximately $224k.

Mary Ann Jeffers, SABOR’s 2015 Chairman of the Board, explains that, “The tight inventory makes this a sellers’ market while low interest rates allow buyers to make their money go further. It’s a good time to buy or sell on both fronts.”

The market also currently boasts only 3.5 “months of inventory”, meaning that it would only take about three and a half months to sell all the homes currently on the market. This is considerably better than the national average, which rests at 5.1 months. It has also been forecasted that national home sales will rise 7% this year, pointing to an even further improving market.

Angela Shields, SABOR’s President and CEO, explained, “San Antonio’s housing market has typically remained steady…We are very fortunate to live in a city with a strong economy and booming job market that helps housing remain affordable.” Needless to say, San Antonio has had a year for the books! 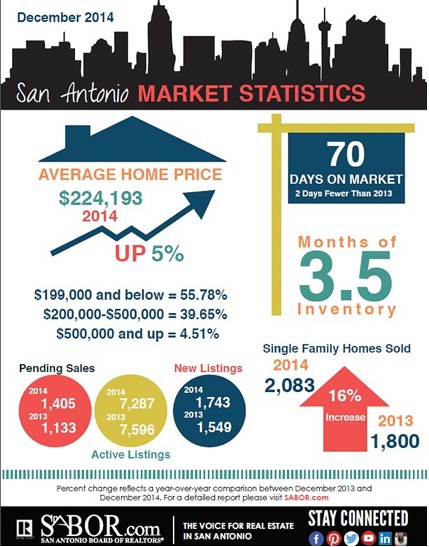