This month we recognize  Taryn Brooks as our rising star. Taryn, a third generation REALTOR®, takes her business to heart. Aiming to carry on a tradition established by her grandfather, she has become multi-million dollar producer and a trailblazer within the Keller Williams family. Taryn’s approach to real estate has earned her multiple awards within the Keller Williams organization, but more importantly, it has earned her the trust of both her associates and clients.

Selling over $1 million of real estate in the first three months of her first year, Taryn showed determination that would launch her into an elite group of top-producers. After the completion of her first full year, Taryn had increased her sales to over $4 million- a feat that is not accomplished easily. Because of her drive and success as a new agent, Taryn was asked to speak to the newest class of incoming Keller Williams agents, an honor for any agent, let alone a newcomer.

Aside from winning production awards for every year she has been licensed, Taryn is the youngest agent ever to receive the Keller Williams award that recognizes agents for providing the most detailed and technically correct contracts. And, while she may seem modest, Taryn is a high achiever, recognizing that it takes hard work to succeed, and that failure is not an option. 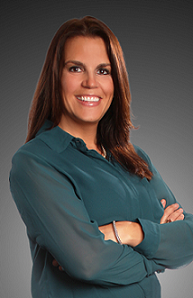 Q1: What did you do before real estate?

I’ve naturally gravitated to sales positions all my life! Before real estate, I was a manager and team leader in one of the fastest growing silver jewelry companies in the country.

I interviewed with a handful of companies before choosing KW because I wanted to know I was going with the absolute best out there! Keller Williams has not only met my expectations, but also exceeded them. I knew a career in real estate was going to be a long-term decision for me.  Team culture, ongoing training, support, encouragement and growth opportunities are only a handful of reasons of why I chose KW.

Q3: What has been your biggest challenge so far?

Looking back, when I finished real estate school and the initial KW training, I still wanted to know absolutely everything before I took my first step in the business….all the “what ifs” were circling in my head. Faith is taking that next step even when you don’t see the staircase. From the start…that first phone call or appointment, I was hesitant, but once I took the first step I hit the ground running. I realized actual experiences were rather stepping-stones to starting my business, not stumbling blocks as I had imagined. Taking action and getting out the door is the fastest way to grow!

Q4: What has been your biggest reward so far?

I couldn’t have imagined the rewards real estate has brought me both personally and professionally. One of the biggest rewards has been exceeding goals that I’ve set in place for myself. Another big reward has been satisfied clients referring friends and family to me! It says I’ve done my job very well, and we have built up a trust and relationship.

Q5: What has been the biggest benefactor in your success?

Support and encouragement from my father and the Keller Williams family. I was quickly shown what the KW family culture is all about. Instead of stepping on each other to lift themselves up, the KW family is there to help everyone. They have a “we rise by lifting others” approach and it shows.

Q6: Where do you find inspiration?

One of my biggest encouragers and supporters throughout my life has continued to be my father, Fred Yaitanes. My father and stepmother are REALTOR®s. My grandfather was also a REALTOR® before he passed away. Being a third generation REALTOR®, I am continually inspired by the way my father has built his business through referrals, making it a business he is very proud of. I have also been in my team leader Jon Allman’s office continually. Jon has been an inspiration to me, and is someone I hold in high regard.

Q7: What is your favorite thing about San Antonio?

I’m originally from Massachusetts, so most of my family lives in New England, and some in California. I definitely consider San Antonio my home. My friends and church have become my family here. San Antonio is such a large city but has a small town feel to it that I love.

Q8: Name one thing we might not know about you?

I lived in Hawaii for a few years when I was in my early twenties. I took a break from college, headed out with money I received from selling my car, a blue Toyota Celica, I’ll never forget it. I got a job cocktailing on the beach, went skydiving, hiking, camping and enjoyed life to its fullest!

Q9: What is your favorite restaurant?

Anyplace that has Sushi! Sushi Zushi is my top favorite. Dinners I’ve enjoyed the most had to do with the company I was with!

I see continued success with a company I’m proud of and work that I love. Personally, my ideal life would be surrounded by family, friends and a life of travel. Professionally, keeping in touch with my clients has always been extremely important to me! That is the single most important and best part of my business. I will continue to help them move up, move down and will value their referrals for life!

#KW10Q: Talking Tequila and Building a Business with Maggie Wilmoth