Where did you get your morning cup of coffee?

From the app developers of SA’s rising tech scene to library-dwelling UTSA students to bleary-eyed parents driving their kids to-and-from school, it seems everyone in San Antonio is powered that first morning cup of coffee (or second...or third...).

Hence why Merit Coffee’s incredible espresso (and pastry case full of Bakery Lorraine pop-tarts) is not only a local gem, but a San Antonio staple. As one of the Alamo City’s original specialty coffee shops (originally called “Local Coffee” and later re-named “Merit Coffee”), this beloved SA chain has been fueling our all-nighters and our early mornings, our business meetings and our playdates, our meet-cutes and our “Monday motivation” since it was opened by Robby Grubbs in 2009.

And so, to get a look inside San Antonio’s favorite “neighborhood coffee shop,” we sat down with owner and founder Robby Grubbs to talk SA’s burgeoning specialty coffee scene, neighborhood vibes, and just why everyone is so obsessed with Merit Coffee (seriously, customer loyalty is off-the-charts). 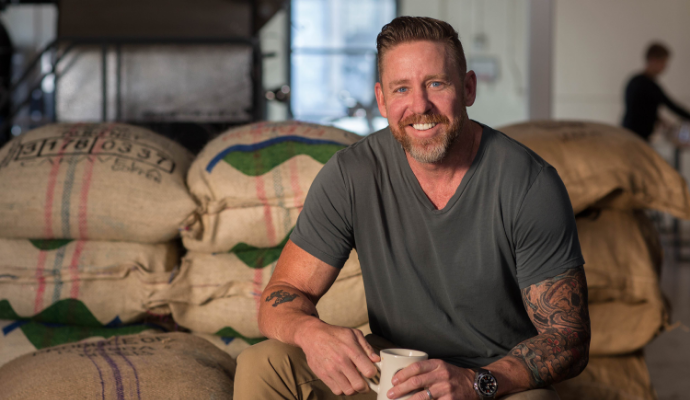 Q: What’s your personal history with San Antonio? What brought you here?

As one might expect from an adventurous San Antonio native, Robby’s curiosity and ambitions led him away from the Alamo City before eventually drawing him back home. Upon graduating high school and moving to Colorado, he explained that he spent nearly a decade in Boulder and Denver before finding his way back to Texas: first Dallas, then Austin, then (finally) back to San Antonio in 2009, where he combined a love for coffee and design to create Merit Coffee. 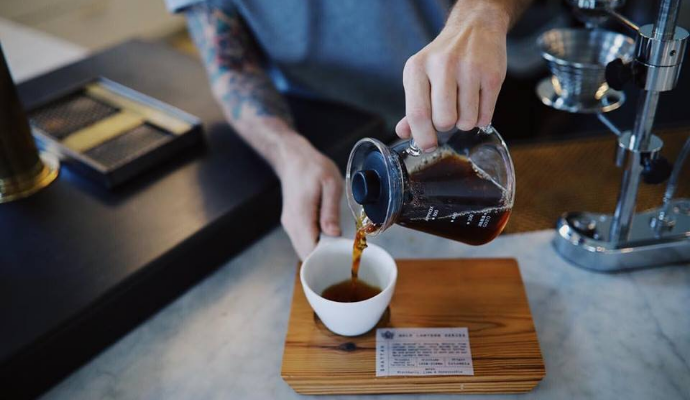 Q: Did you always love coffee?

Robby laughed, recalling the unlikely beginnings of his would-be obsession with coffee culture: “[In college], I was a total oxymoron. Like, not at all the person you would expect to hang out at a hip coffee shop today. I was this total meat-head granola guy...but when I moved to Boulder, I fell in love with coffee shops. I was way more into the culture than the coffee itself.” 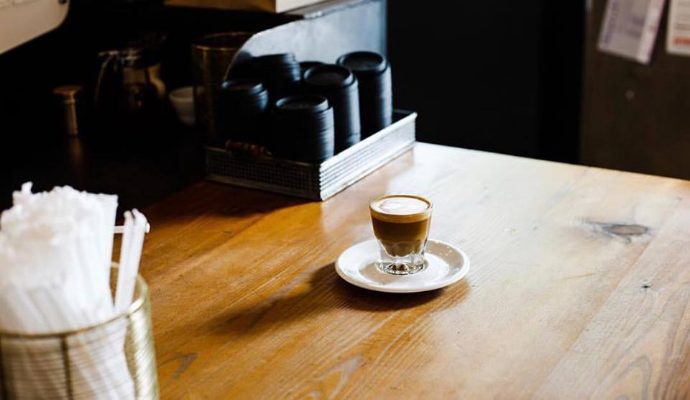 Q: How did you go from a coffee shop junkie to a barista? What got you involved in the scene?

As most passion-project stories, Robby’s begins with finding out what he didn’t want. “I was out of school, and I figured, ‘What am I gonna do now?’ So I cut my hair, interviewed for a corporate job, and moved to Dallas.” However, when Robby quickly discovered corporate work was not his style, he jumped into the coffee industry and started working for a commercial brand, assisting in what was then considered cutting-edge coffee culture. However, as the work developed more and more of a “fast food” vibe over the years, Robby ended up leaving the scene and going into real estate and development. 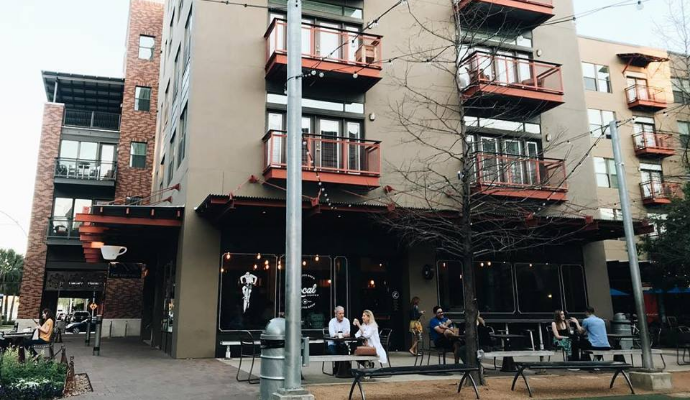 Q: What’s your history in design and development?

“I always had a thing for design and architecture...so in 1999, [my stepbrother and I] started building homes in Austin. We helped build in Tarrytown and downtown ATX. I worked with Dick Clark architecture (the godfather of modern architecture in Texas) and helped build half a dozen projects he designed. [He really] elevated my standards and expectations.”

Q: What was the journey to opening your own cafe?

Robby had always toyed with the idea of building out his own coffee-centric space, but had never really seen a great example great coffee paired with great design. Thankfully, a newfound obsession with a specialty shop in Austin (Cafe Medici) and subsequent family visit to San Antonio sparked the initial vision for what would soon become the first Me rit cafe.

“I was driving around [Stone Oak] and saw that this one corner was empty...I just had this sudden vision for it: a huge, beautiful melting pot of people enjoying great coffee. I asked my wife: ‘Should we consider this?’” Needless to say, more than a few people thought he was nuts [especially considering the timing, which coincided with the 2008 recession], but Robby proved all the would-be “haters” wrong and opened the first Stone Oak storefront less than six months later. 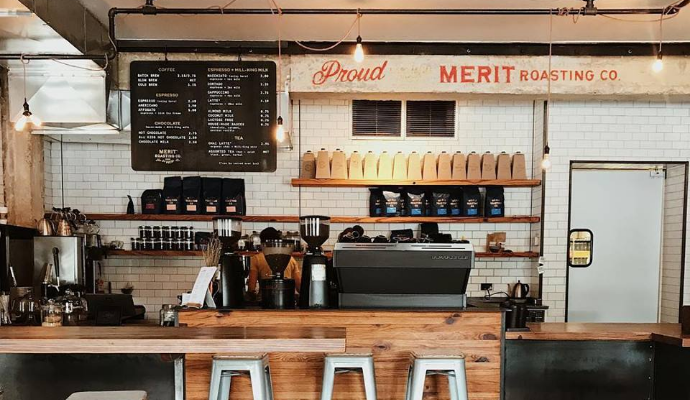 Q: How was Merit’s approach to coffee different than other SA cafes?

“From the beginning, the thing that makes us who we are is that we stay in this constant state of teachability. I think it keeps us humble. We always want to be in this constant evolution of, ‘How can we do what we’re already doing and make it better?’ As a result, we are constantly evolving and pushing the bar...But at the same time, we always want to stay approachable and accessible. We want to be the best at roasting, sourcing, and making coffee without intimidating anyone who comes in. There’s no such thing as ‘one size fits all,’ but we do our best to make our experience as universal as it can get.” 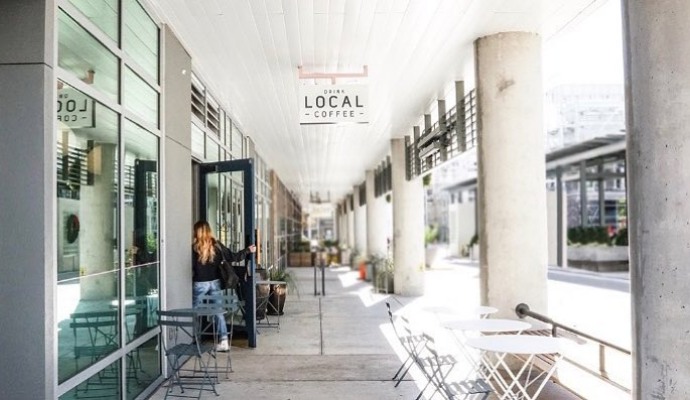 Q: You have six Merit cafes in SA (and one in ATX!), each in different neighborhoods. How do you design and plan each cafe to fit the area?

“This is where my custom home experience has helped a lot,” Robby explained. “I knew early on when we expanded out from Sonterra that we couldn’t do the same thing. Being ‘site specific’ is important.” Robby’s design philosophy for his cafes employs similar concepts involved in homebuilding: “When you’re building homes on a slope, you could just force it into being flat: pour a ton of concrete and make it level. Or, you could design something specific to fit that landscape...a cool walk-out basement or porch. I try to do the same thing with cafes.”

"Take the cafe at The Pearl. We put a ton of seats at the bar. We have so many new and different kinds of people coming into that cafe. I thought this would open up a lot more dialogue with the staff and other customers.” In Alamo Heights, the same customization applies: “We knew it was a neighborhood spot where people wanted to be seen...so it’s more dining room seating.”

“We also look at what is happening in the area design-wise. Do we need to do something different to complement the area? I always try to create something unexpected.” 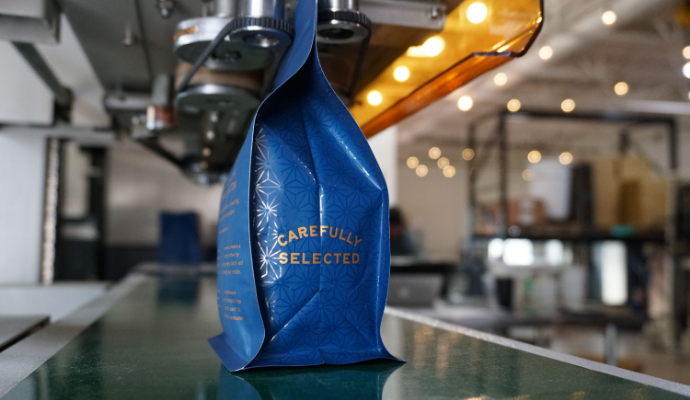 Q: What are you drinking these days?

“Honestly, I’m just a black, drip coffee guy. Right now, I’m super excited about the new Guatemalan batch we launched [called “Camelias”]. It’s known for this juicy, fruity taste, but also really hardy with a lot of deep chocolate and caramel body...it’s an absolute crowd pleaser. I’ve been looking for a coffee like this for years. We’re using it as our house coffee right now.”

Q: If you had to choose one of your coffees that best exemplifies SA, what would it be?

“Anything we serve for our house coffee. We go to lengths to serve a coffee that’s really accessible...almost like an elevated diner coffee. Whether you’re a young coffee nerd or just a busy person walking in off the street, hopefully you’re like, ‘WOW, this is a good cup of coffee. What am I drinking?’” 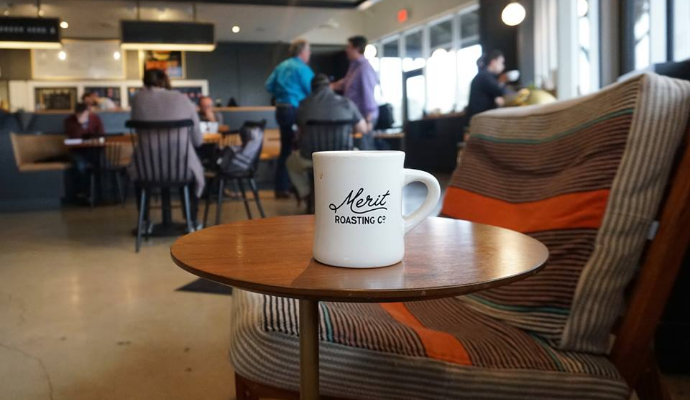 Q: You recently expanded to Austin (with more plans nationwide)...what’s the growth trajectory? How do you feel about planting a piece of San Antonio in other cities?

Check the list below to visit the local Merit cafe in your San Antonio neighborhood!


15 of San Antonio’s Most Beautiful Restaurants