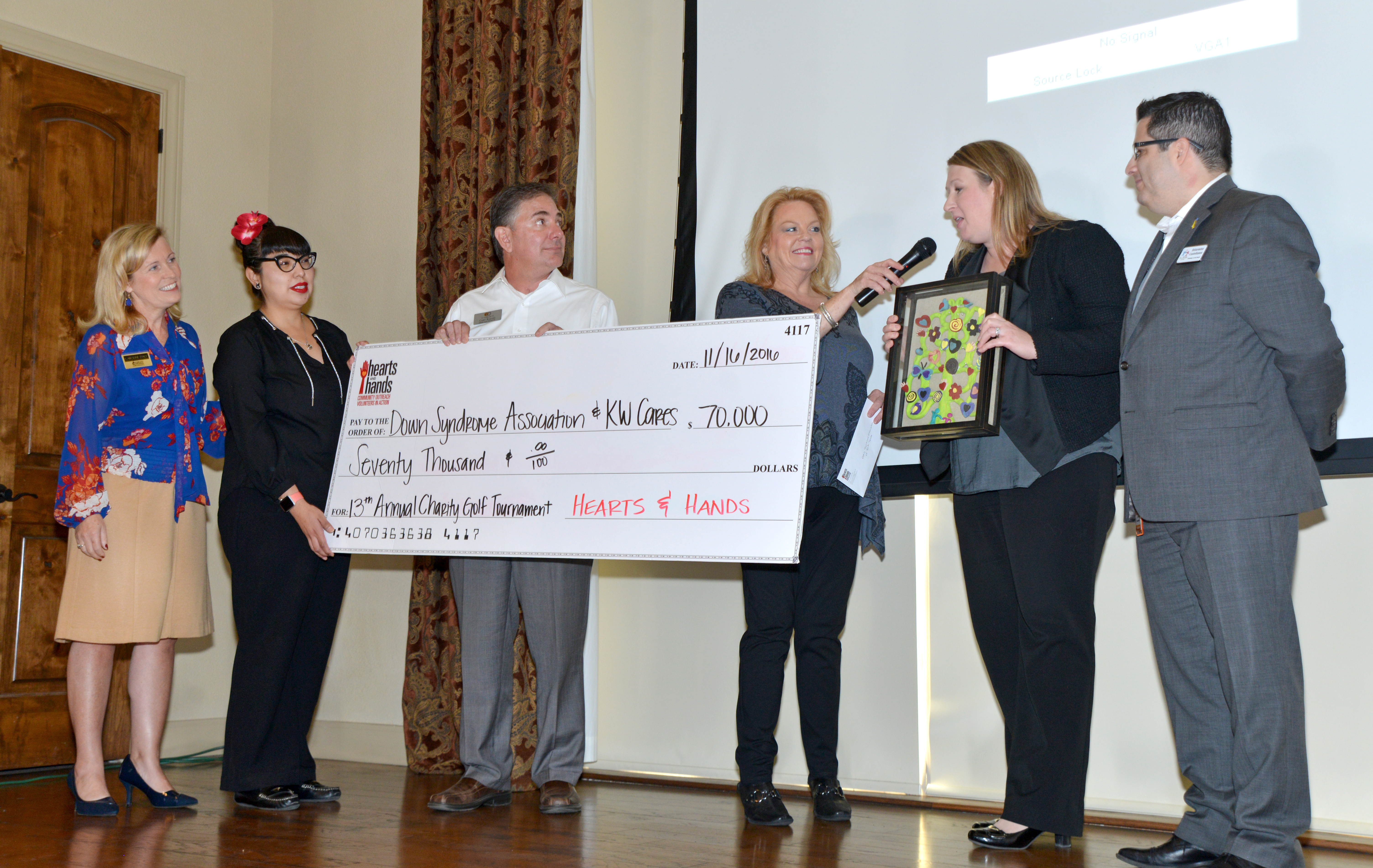 Recently handed a $70k check by a local real estate brokerage’s philanthropy group and receiving the support of many people in the community, the Down Syndrome Association of South Texas (DSASTX) has purchased a facility twice as big as the one they had outgrown. From Realtors® to local businesses to philanthropists, the San Antonio community came together to help this local non-profit achieve their goal of creating a “home” for the individuals and families with Down syndrome they serve.

Running out of time before their lease expired on a space that was too small, the DSASTX was selected as a beneficiary of a charity golf tournament organized by the philanthropy group Hearts and Hands, of local San Antonio real estate brokerage, Keller Williams Heritage. Hearts and Hands President Roslyn Casey said of the fundraising efforts, "We were so excited to be able to help the DSASTX. It is an incredible organization deserving of our support.”

The DSASTX, which provides a community of ongoing programs for individuals and families with Down syndrome in San Antonio, chose commercial real estate agent, Patricia Chavez of Keller Williams Heritage to represent them in the search for their property. Together, the group and Chavez found a property owned by a seller and represented by a real estate agent, who were compelled to work with the DSASTX because they believed in their vision of supporting children with special needs.

Upon evaluating the benefits of leasing vs. buying, the DSASTX decided to use their donation towards purchasing the space, which used to be a daycare, instead. The seller accepted their offer to purchase the property and allowed them to lease it until they were able to close.

"We weren't planning on buying anything at first," Heather McFarland, Director of the DSASTX, said. "But when we saw this building and things started to fall into place, it became clear that this was the perfect opportunity to make it our new home."

The 4,600+ square foot building allows the DSASTX to provide a larger range of services from life skills in the kitchen to parent groups in the classrooms to playtime meet-ups at the on-site toddler area, basketball hoop, playground, or splash pad.

Though they have moved into their new space, the DSASTX has plans to renovate the facility, with a goal to raise over $1.12 Million over the next year. Long time philanthropist and businessman, Gordon Hartman, who contributed a lead gift toward the campaign, was a driving force in enabling the DSASTX to move forward with the purchase, which closed March 30th. The DSASTX’s new building will be named The Maggie Hartman Community and Education Center, after Hartman’s wife.

“While the property is in need of a facelift,” says Chavez, “we knew right away that it was perfect for them.” Chavez adds, “This has been a really heartwarming process. When people are so passionate about seeing the vision of all of this, everyone just comes together to make it work.”

1114 Patricia prior to DSASTX's purchase

Says McFarland of the new facility, “It is great to see people come here and feel like they have a home- it’s a place that we all come to now and feel pride in. There’s just something to be said about this being ‘ours’.”

About Hearts and Hands:

Hearts and Hands is a 501 (c)(3) not-for-profit organization established to underwrite public outreach and volunteerism opportunities in the San Antonio area. Hearts and Hands 501(c)(3) is staffed entirely by volunteers (many of which are KW agents) who wish to selflessly serve their community. The majority of their monies are raised through fund-raising events and individual donations, which are returned to charities in the greater San Antonio area. This charity is another heartbeat in the life of the Keller Williams culture - finding and serving the higher purpose of business through charitable giving in communities where KW Heritage agents live and work.